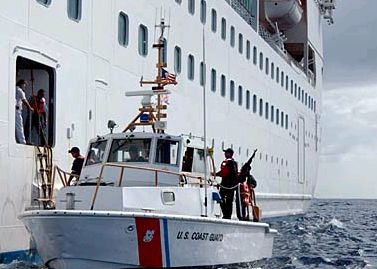 HONOLULU, Hawaii - It isn't often that I get to personally view cruise news as it happens, but today RCL's Legend of the Seas steamed past the window of my home office. Cruise ships entering Honolulu Harbor are not unusual, but the early afternoon time was strange. Even the Coast Guard escort wasn't that unsuunusualt again the arrival time was. A quick check of the online Hawaii Harbor Division Schedule of Passenger and Cruise Vessels indicated the cruise liner was arriving five days early.

The Legend wasn't boarded by the Honolulu Harbor Pilots but continued past the harbor entrance and dropped anchor a mile off of shore. Instead, the ship originally bound for Hilo, was boarded by Officials from the FBI's Joint Terrorism Task Force which included investigators from the Honolulu Police Department, Coast Guard, immigration, customs and other agencies. Two notes were found in Womens restrooms stating that all the passengers would be killed if they docked in a US port.

UPDATE: 5/01/2003 - A 20-year-old love-sick California woman was accused of leaving threatening notes in an apparent attempt to force the Royal Caribbean's Legend of the Seas cruise ship back to port. She told Federal Investigators that she never wanted to take the cruise, and missed her boyfriend. Federal officials said she didn't show any remorse for her actions. Officials are treating the situation as a terrism threat due to the massive problems that were the results of her notes. She hoped that her terroism threats would force the cruise line to return the ship to US waters. She was ordered held without bail, her parents, who already returned to California, did not bail her out. Details: Honolulu Advertiser - Woman held without bail

UPDATE: 9/23/2003 - The accused woman was sentenced to two years in prison yesterday, the maximum under federal sentencing guidelines. The Judge told Kelley Marie Ferguson that she found her actions to be "particularly reprehensible" and the "kind of behavior that can't be put aside as youthful folly or naivete." Ferguson will begin serving her prison term on Nov. 4.