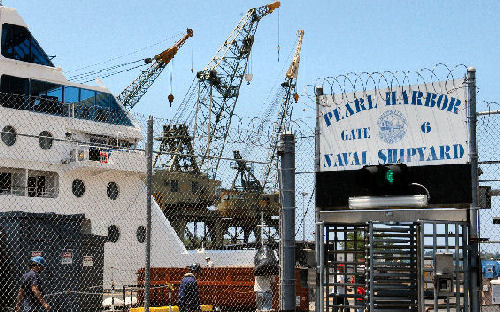 PEARL HARBOR, Hawaii - April 29, 2005 - By Bruce Murray - Sanders Piano Company has been serving Honolulu community since 1954, but what was their delivery truck doing in Pearl Harbor Naval Shipyard at Dry Dock Four? Surrounded by warships, barbed wire and high security this truck definitely wasn't traveling its normal route. But the Sanders Piano truck was their servicing the first foreign flagged cruise ship to ever enter Pearl Harbor Naval Shipyards, the Tahitian Princess.

This Gibraltar flagged vessel arrived for a week of routine maintenance and fresh paint with services provided by Hawaii Shipyards Inc. (HSI) who hopes the Pearl Harbor dry-dock will become a regular stop for cruise ships. Hundreds of local tradesmen and those who flew in just for the event are working round the clock.

In a public private partnership between HSI, the Navy, and Princess Cruises this is the first of two ships that will enter Pearl Harbor for maintenance. The Pacific Princess is next to arrive. Pearl Harbor has only 12 permanently stationed warships, leaving their massive dry-dock facility empty most of the time.

Hawaii Shipyards Inc. press release is below, Princess Cruise Lines has not issued a statement.

This marks the first time the two, 594-foot foreign flagships have been given permission to dock in US waters. Previous multi-million dollar repair and maintenance contracts for the two vessels went to foreign countries. Now Hawaii workers will get the jobs and the paychecks. More than 400 Hawaii ship repair workers will work on the two vessels. Hawaii's tourism industry will also get a boost, with 700 passengers and 300 crewmembers spending 10 days in the islands while the ships are serviced.

"This is really a win-win situation for the state, the Navy and the entire private sector," said Bill Clifford, President and CEO of HSI. "It makes use of a dry dock that wasn't scheduled for Navy use. It opens the door for more similar opportunities, and it provides the state and the maintenance community with a groundbreaking revenue opportunity."

With the U.S. Navy fleet of ships slowly shrinking under Congressional budget cuts, commercial work on large cruise ships can help keep Hawaii's maritime industry afloat, says Clifford. "The industry needed a boost. We got a great one."